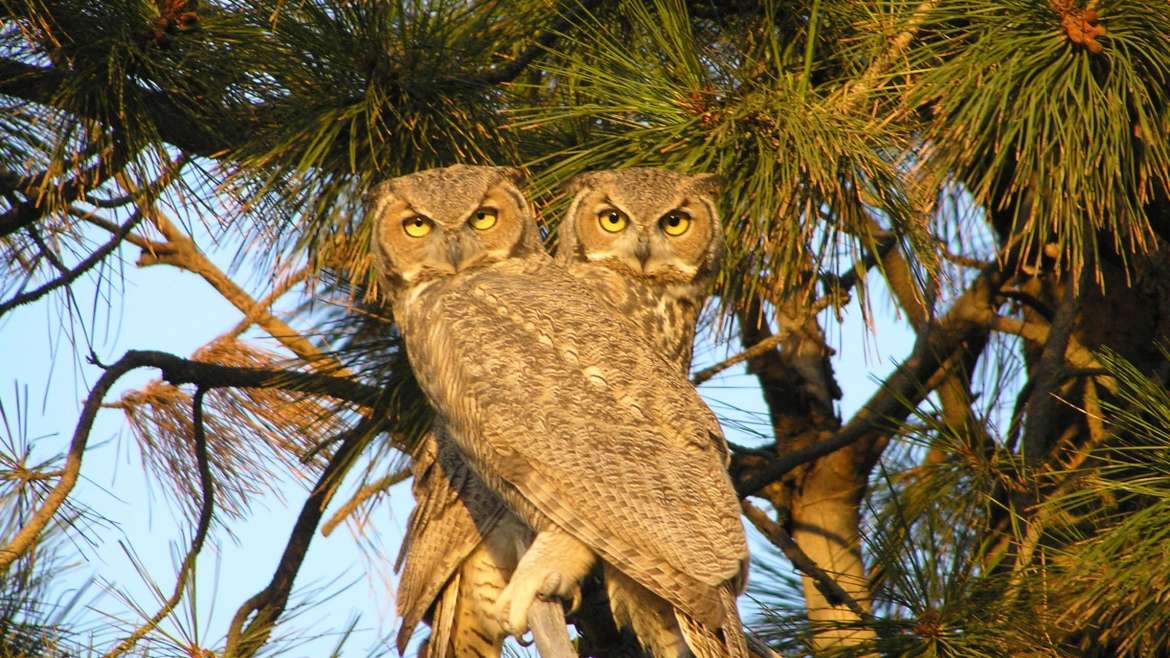 A pair of Great Horned Owls have made Grand Oaks of Palm City their home, and the residents and staff are excited to welcome their new feathered friends to the Grand Oaks family.

One day in late December, Laurie Allen, Grand Oaks of Palm City’s Administrator, noticed something large sitting in a pine tree adjacent to the community’s parking lot. She and some of her staff members walked toward the tree to get a better look at what was perched high in the branches. Soon, it became apparent that it was a Great Horned Owl, and Laurie and her staff were full of surprise–and a little bit of awe. Laurie left to tell Russ, a resident of Grand Oaks who has a love of nature and animals, especially birds.

“At first, he was hard to see because he was up so high,” said Russ. “But then I saw him and it was really neat!”

After taking some time to watch the owl with Laurie, staff members, and other residents, Russ turned to leave. Suddenly, he heard someone say that another Great Horned Owl had landed on the pine branch. It was a female owl that had come to nest in the tree with her partner.

“I got to see them both! I really liked that because it’s rare to see them together,” Russ said.

“The hoots sounded different, so we knew there was two of them hooting,” said Miriam. “It really sounded like they were talking.”

The mating season for Great Horned Owls begins in late December. During courtship, they can be heard hooting back and forth for hours before beginning a special courtship “dance.” Laurie says no one has seen baby owls poke their heads out of the nest yet, but they’re remaining optimistic. Great Horned Owl parents will continue to feed and care for their offspring for several months after hatching.

As it turns out, Owliver and Owlivia are just two of many different species of birds that call Grand Oaks of Palm City their home.

“We had two Egyptian Geese on the patio roof top, and yesterday morning there was a Roseate Spoonbill walking the banks of our pond,” said Laurie.

For seniors who value their independence but prefer assistance with daily tasks, Grand Oaks of Palm City is an ideal choice. They offer chef-prepared meals, resident parking, enriching activities, companionship, state-of-the-art medical care, and so much more. The Memory Care community provides a secure environment with consistent caregivers who are passionate about what they do.

For more information about Grand Oaks of Palm City, or to schedule a complimentary tour, call Beth Kelley at 772-324-5024.

Contact Us!
Our sales professionals are ready to help